A discussion forum for the SmartPLS community.
https://forum.smartpls.com/


I have three IVs predicting one DV. One of the IVs did not predict DV. In my initial manuscript, I mentioned that possible reason accounting for the null finding could be the reason that the particular IV varies from one ethnic group to another ethnic group (ethnic difference). I did not hypothesize any ethnic influence in my study at all but only in the discussion section suggesting for future research possibility. And in my initial write-up, I gave the reason that our ethnic group has disproportionate size(some ethnic size big some small) and my research focus is not on any ethnic difference hence I did not study ethnic in my analysis.


The reviewer came back and provided this comment:
- the authors identified ethnic as a potential confounding variable-has the authors taken this into consideration in their analyses(e. g., covariate), especially since data on ethnic composition are available?


1. I am not sure what the reviewer wants but I am thinking they may need to rerun my analysis?
2. Do I need to add a control variable (ethnicity) in my smartPLS model based on the reviewer's comment.
3. And if so, I am not sure how to do it. I have already created the dummy variables via SmartPLS and four ethnic groups have been created. I have asked Prof. Gaskin about this he suggested me to add a "control" variable pointing to the variable which is being affected. Is this enough? and if Yes, shall I re-run my measurement model and structural model assessment? I have found weird figures for the measurement model criteria (ethnicity- Cronbach's Alpha -24.xxx, Composite 0.041) and VIF (Chinese, Malay and Indian) also. And if this is correct, how do we determine whether there is any effect of ethnicity? or self-esteem?

I have also asked another professor and he suggested me to conduct moderation as commented below:

I would appreciate it if you could provide me some insights on what should I do at this stage. 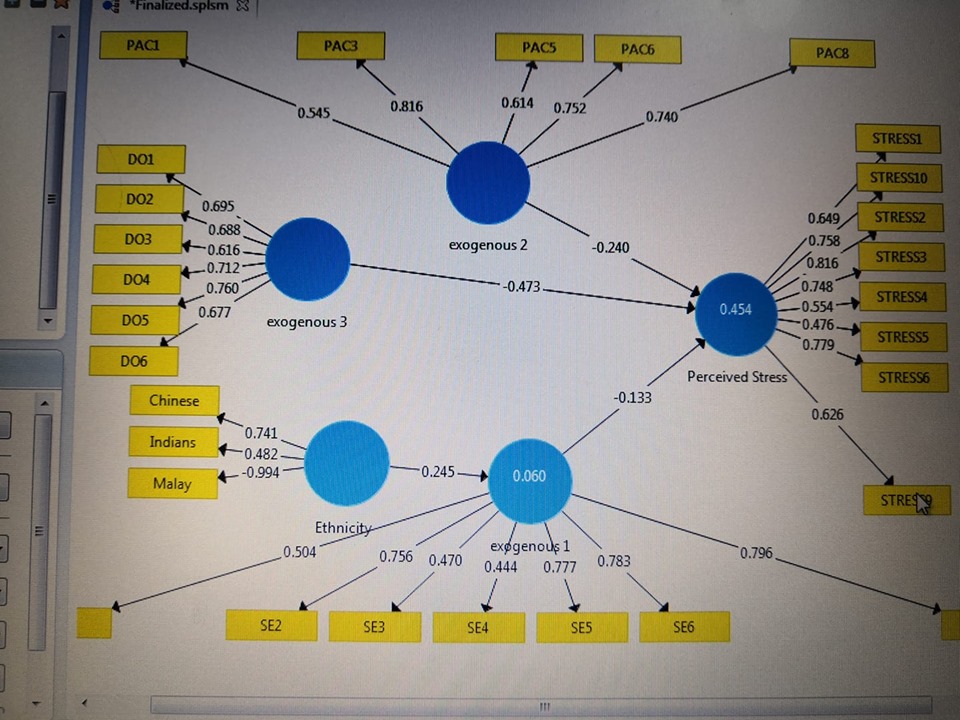 Re: Adding a control variable or moderating variable?

by jmbecker
Treating Ethnicity as a control:
1) Do not add all the dummies onto one construct but model them separately as single-item constructs. Adding them to a construct doesn't make much sense. The measurement model statistics are also not meaningful in such a case.
Also be aware that if you create dummy variables for a categorical variable you have to omit one category which becomes the reference category.

2) Have them influence the DV and not the IV. You want to control for their differential effects on the DV compared to the other IV’s effects.

Using them as moderator:
Given your own discussion in the future research section you are actually suggestion ethnicity as a moderator. You imply that the focal effect varies by ethnicity. Hence, you want to test it. I think that is also want the reviewer is referring to.
Exploring ethnicity as a control is fine as a first step, but given your own suggestion you want to test its moderating effect.

Using it as a moderator you have two options: MGA or interaction term. Using the interaction term approach you also need ethnicity in the model as described above for the control. Then you need to add interactions for each dummy. Each interaction will describe how the effect changes to the reference group.
Or you use an MGA comparing all the groups pair-wise (you will need to control for error-type inflation and check measurement invariance first). The important question here is if you have enough observations (sample size) for each group (ethnicity)?
All times are UTC
Page 1 of 1
Powered by phpBB® Forum Software © phpBB Limited
https://www.phpbb.com/